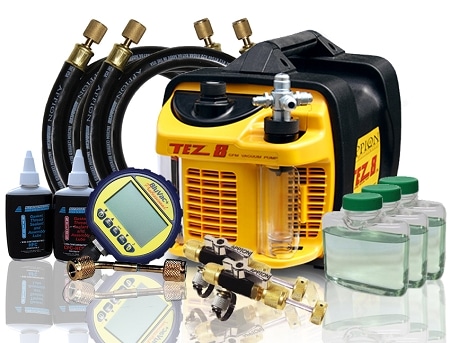 Why Your AC Installation Calls for Triple Evacuation

Why Your AC Installation Calls for Triple Evacuation

The triple evacuation is meant to be a means of dehydrating refrigerant tubing in a system that has high water content before refrigerant is introduced. This was and is still used on systems that have the potential for water to freeze while vacuuming.

Does water inside the tubing freeze while vacuuming? Do you have to worry about this on most systems? That sounds like a whole other article for another week, but we will discuss some of the topic now! On air conditioning split systems, we usually don’t have to worry about water freezing inside the tubing while vacuuming since there is quite a lot of tubing that exchanges heat with its surroundings. As you remove the air from within the system’s tubing while vacuuming, heat is removed. This is because the heat is stored in the air inside the tubing. If the removal of heat happens too quickly then it is possible for any water left in the system’s tubing to freeze. However, the tubing transfers heat from the air surrounding the outside of the tubing to the inside of the tubing. The tubing can absorb heat surrounding the outside of the outdoor condenser, the indoor evaporator, and the line set which connects the condenser to the evaporator. This will usually be more than enough heat to replace the heat lost while removing the air when using the vacuum pump. Now that we’ve got that covered, let’s get back to the triple evacuation.

So what is the “Triple Evacuation”? For most techs, this question originates from hearing about the triple evacuation during the EPA 608 certification exam review. Presently, the triple vacuum method is listed in multiple installation manuals especially those with smaller tubing such as mini-split systems.