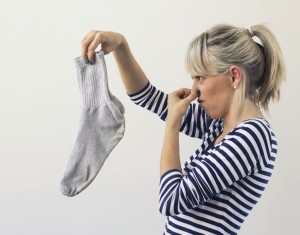 During the energy crisis of the early 1970s, heat pump systems became popular for many commercial and residential hvac applications because of their lower first cost and potentially energy-saving performance.
Manufacturers, wholesalers, contractors, and even electrical utilities rigorously promoted the concept, and a new market was launched.

Shortly thereafter, however, came the complaints, particularly in the Southeast, of an odor originating from the much-endorsed units. This foul smell sent manufacturers, wholesalers, and service entities scrambling. The odor was characterized in many ways, but the most vivid description was “like someone’s gym socks found their way into my a/c unit.”

The term “Dirty Sock Syndrome” was born, to the chagrin of the industry, and soon became the unofficial name for this heat pump phenomenon.

The only known remedies at the time were to clean or replace the coil, use drain pan treatments, or in extreme cases, replace the entire unit — and even that didn’t always solve the problem. Generally speaking, however, frequent cleanings with bleach did temporarily reduce the odor to acceptable levels.

Newer and more energy-efficient units seemed predisposed to the problem. It also began occurring during the heating season as well as the cooling season, but especially during “shoulder” seasons like fall and spring, when the units would be used for heating at night and cooling during the day.

The condition became so widely recognized that it was no longer limited to just heat pumps or the Southeast.

Generally, the early cleaners like chlorine have been banned for use in a/c systems. As a result, service contractors are using EPA-registered biocidal agents on coils, drain pans, air filters, and insulation to suppress the problem.

Like the earlier remedies, though, these agents do not provide a permanent solution. The problems eventually return in just a few months or less.

What causes the odor?
In order to find a permanent solution to the Dirty Sock Syndrome, it was first necessary to understand how the odor was generated. Curiously, the cause of the problem all along was the simple growth of mold and bacteria on the coil, as indicated by the effect of early cleaners.
Heat pumps were particularly susceptible because, unlike conventional heat exchangers, their heating cycles were not hot enough to kill the microbes that thrived on their wet coils during the cooling season. Instead, the temperature was just warm enough to slowly “cook off” their organic odors, producing that gym sock odor.

Adding to the problem were the water and organic debris in the drain pan, which formed a fertile garden of microorganisms. The slow warming of this contaminated water released a plethora of spores and toxins into the air that served the conditioned space.

Why the problem appeared during the heating season was linked to the “reverse mode” operation for defrosting the outdoor coil. This process generated moisture on the indoor coil, giving dormant microorganisms and residual organic matter new life, and providing a simple but effective odor release and carrier mechanism.

In addition, they retain more moisture, stay wet longer, and their drain pans hold more water and organic debris. All of these factors contribute to a longer and more productive cycle of microbial activity.

This greater activity equates to more spores, toxins, and odors for a longer period of time.

Mold: A survivor
Why is mold so difficult to control?
Mold is at the bottom of the food chain. It thrives on very little, grows rapidly, and produces spores, volatile organic compounds, and other toxins. One organism can multiply to trillions in less than three weeks.

And mold occurs everywhere — in hvac systems in homes, schools, workplaces, entertainment centers, vehicles, etc. They all are mold reservoirs.

As noted above, a/c equipment interiors provide an ideal environment for mold growth — it’s dark, damp, and filled with nutrients. The result can be like blowing air over a swamp or through a sewer and then into our homes, vehicles, and workplaces.

According to the World Health Organization (WHO), 60% of IAQ problems and allergies may be mold-related. Some IAQ diagnosticians and practitioners today say the figure may be as high as 80%. The increased usage of air conditioning systems (installed base) almost directly parallels the increase of allergies and IAQ problems.

As mold and bacteria grow on coils and in drain pans, they are disseminated through the ducts to occupied spaces. Some mold products (toxins) produce serious and sometimes life-threatening reactions, including allergy, asthma, hypersensitivity pneumonitis, and even bleeding lung disease.

Using UVC
Accurate Environmental Systems has found that the most successful way to handle system mold is through continuous source control using hvac-style UV germicidal lights.
Ultraviolet light in the “C” band (UVC) has been used for more than 65 years to kill microorganisms in hospitals, laboratories, food processing, and pharmaceutical plants, and even at the nation’s Center for Disease Control.

However, conventional UVC products are limited to still air applications where ambient temperatures are of 80Â° to 90Â°F, and are therefore not effective in the cold and moving temperatures found where mold grows in hvac systems.

As a result, our company has standardized our use of a new generation of patented UVC lights that are specially suited for installation at the coil and drain pan area, to eliminate mold and bacteria right at the source.

Steril-Aire, Inc.’s UVC Emitter™ has been independently tested and proven to produce up to seven times the output of conventional UVC devices in the cold, moving air environments of hvac systems, eradicating mold and bacteria quickly and effectively.

The UVC energy attacks the organism’s DNA and either kills it immediately or prevents it from reproducing. Continuing exposure degrades the carcasses and any other organic material through vaporization (without heat), cleaning the coil to “as-new” specifications.

Emitter tubes typically last more than 7,500 hrs (“on” time), or slightly over one year. The lights pose no danger to equipment, individuals, or furnishings, and there is no risk of secondary contaminants such as particles, ozone, or chemicals being released into the system or space.

For our first UVC customers, the original motivation for installing the lights was to abate IAQ complaints and/or allergies. What we didn’t anticipate when we started working with UVC lights was the elimination of Dirty Sock Syndrome and the return of system efficiency.

In place of the unwanted smell, customers have repeatedly told us that the lights produce a clean, fresh air sensation in their buildings and homes.

Another unexpected benefit has been the complete removal of all the organic material typically found in the interior of the coil and plenum area and in the drain pan. The UVC devices thus eliminate coil and duct cleaning, as well as the use of drain pan tablets and biocidal agents.

We have found that the pressure drop across the coil returns to the original design specifications or, stated another way, heat exchange efficiency and system capacity return to “as new.”

All this and IAQ
The new UVC technology also does what it was originally designed to do: enhance IAQ and reduce the incidence of allergy and illness.
To cite an example, a residential customer named Laura Toms was acutely ill with what had been diagnosed variously as Chronic Fatigue Syndrome, allergies/environmental illness, and Multiple Chemical Sensitivity. After allergy testing revealed a strong sensitivity to mold, we recommended use of UVC Emitters in her Columbus, Ohio home.

About six weeks later, she wrote, “Since you installed the UVC system, I believe I have recovered to the point of being 90% cured, and improving all the time. If you ever had to live with the debilitating fatigue, temperature fluctuations, sore throats, and other symptoms I’ve endured, you’d realize how thankful I am to feel normal again.”

An average installation of UVC Emitters will kill up to 90% of the “fly-by” bacteria and viruses passing through the system. This reduces the recirculation of colds and flu virus or any other airborne disease through the hvac system. If used to control infectious diseases such as TB, the UVC system can be designed to eliminate more than 99% of the bacteria for the greatest level of protection possible.

Given their multiple benefits, we have found that UVC devices are one of the most innovative maintenance and control items to hit the hvac market in years.

A properly designed and installed UVC system will provide your customer with healthier, more energy-efficient and productive environments, while removing those dirty socks from their air conditioners.